This special event is part of the 2013 celebrations that are being run to promote the last flying Vulcan Bomber XH558 in her 2013 flying season.

We will be setting up on Friday afternoon in Hanger 1 at the museum from about 13:00 onwards and if you are free and wish to help you will be more than welcome. The aim is to get at least 2 hours operating after the build before the 17:00 Museum closure.

The station will consist of 2 x HF stations – one dedicated to 40m and the other 20/15/10m depending on band conditions.

Come along and take part and have some fun working a large station and, hopefully, the pile-ups.

Falklands War veteran XM597 @ East Fortune
Deployed in the suppression of enemy air defences role, XM597 is one of only two Vulcans used in anger. The other, XM607, dropped bombs on Port Stanley airfield in the Falkland Islands.

XM597 made the headlines when, due to a fractured in-flight refuelling probe, the Vulcan diverted to Rio de Janeiro. After seven days internment the aircraft and crew were released.

On the nose can be seen two mission markings and a Brazilian flag commemorating her unscheduled stopover. 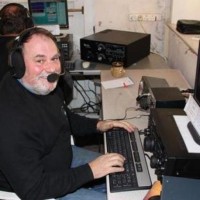 I've been on 17m ft8 with a dipole for a.couplenof hours. It's open to most of the world ATM.

I’m hoping I get a chance to turn the radio on tomorrow. Don’t want to miss good conditions. Had some luck lately on 40m early morning at sunrise with contacts to Japan. Amazing how the DX comes up just at the transition from dark to light. And you can hear European stations further east working the DX before we hear them here.

Not too impressed with Yaesu's quality control. That's the second new handheld I've bought and the second that I've had issues with straight out of the box. Neither of them were particularly cheap either! ... See MoreSee Less

Not good. I'd be straight on to Yaesu UK.

Hope you get it sorted Ronan. Any more CPSARC members with C4FM capable radios? I have FTM-300 and an FT3D. Happy with both radios, but I find the Fusion side of things a bit flakey unless connected directly to Wires X via the laptop....

Replacement radio arriving this evening from ML&S. Hopefully this one will last longer than a week.

I see that the NARSA Rally at the Norbreck Hotel in Blackpool has moved to 24 April 2022 ... See MoreSee Less

I can't go now, I have a holiday booked for that week

Is it book it on your own this year?

Travelodge Blackpool South looks available. Lytham an option. Probably best that we all try to book as close together as we can.

Is it Premier Inn ? Need to open up to others to see who wants to go.

Travelodge. No Premier Inns nearby.

Quite fancy not taking responsibility for booking this year

Yes was thinking that too Bob as unfair when folks drop out. Flip side is we'd all need to book at same time to make sure we can stay in the one place.

Agree. I will send out email tomorrow to those who have shown interest in past. Set a deadline for reply. Then look to see what's available.

If any of the club members are interested please let me know please. Either drop me an email or leave a message here. thank you Replies by Sunday latest to enable that a group booking can be made. Normally book twin rooms. Answers please

Reminder for Activity Day Log
Hi All,
Just a reminder that the last day of the Activity Day is today Friday so if you took part in last week’s activity day now with three choices - a single day, multiple day or all week can you send me your log if you were on (even if no QSOs made).by Wednesday at the extreme latest….. many thanks.
Remember to use the latest log sheet which I sent out.
All reports greatly appreciated…